Q1.   If a trait A exists in 10% of a population of an asexually reproducing species and a trait B ists in 60% of the same population, which trait is likely to have arisen earlier?
Ans. Trait B is likely to have arisen earlier as it occurs in more number.
Q2.   How does the creation of variations in a species promote survival?
Ans. Variations increases the adaptability of an organism to its changing environmental conditions.
Q3.   How do Mendel?s experiments show that traits may be dominant or recessive?
Ans. Mendel took pea plants of two different thuacters i.e., tall plants and short plants. The first generation of F1 progeny formed were all tall. This shows that traits may be either dominant or recessive, there is no way in between traits obtained.
Q4.   How do Mendel?s experiments show that traits are inherited independently?
Ans. When Mendel crossed pure bred tall pea plants with pure bred short pea plants, he found that only tall plants were produced in F1 generation. Mendel, further crossed the tall pea plants obtained in F1 generation with dwarf plants and obtained the ratio of Tall: Short plant 3 : 1 in F2 generation. This experiment proved that traits are inherited independently so other intermediate traits or new traits were formed.
Q5.   A man with blood group A niarries a woman with blood group O and their daughter has blood group O. Is this information enough to tell you which of the traits-blood group A or O dominant? Why or why not?
Ans. The given information is not enough to tell us which of the t nits-blood group A or O ? is dominant In blood heredi, bood type A is always dominant and blood type O is always recessive. Here, father’s Blood group can be 1AIA (homozygous) or IAi theterozygous) genotypically, where that of mother is if. For daughter to be born with blood group O, she must receive i type gene one each from father and mother. For this father must have heterozygous IAi blood group and mother must have homozygous blood group ii.
Q6.   How the sex of the child determined in human beings?
Ans. In case of human beings female sex have a pair of chromosomes (sex) and male sex have a pair of XY sex chromosome. When the crossing of male and female gametes takes place then the sex of the child determined as follows:

This shows that the ratio of male: female sex of the child is same i.e., (1 : 1), 50% possibility of each is seen here.
Q7.   at are the different ways in which individuals with a particular trait may increase in a population?
Ans. The ways in which individual with a particular trait may be increased a population are:
(a) If it can survive in the adverse condition i.e., naturally selected.
(b) It can also be increased by the inheritance.
Q8.   Why by are traits acquired during the life-time of an individual not inherited?
Ans. The traits can be inherited from one generation to the other only if there is a variation/change in DNA. The traits acquired during the life-time of an individual may not bring change the genes of DNA.
Q9.   Why are the small numbers of surviving tiger’s a cause of worry from the point of view of genetics?
Ans. The small number of tigers are causing a worry for the genetics because if they become extinct then the genes of this species will be lost forever. There will be no scope of again getting this species back to life without their genes.
Q10.   What factors could lead to the rise of a new species?
Ans. The factors which can lead to the rise of a new species are gene flow, genetic drift, reproductive isolation and natural selection.
Q11.   Will geographical isolation be a major factor in the speciation of a self-pollinating plant species. Why or why not?
Ans. No, geographical isolation cannot he a major factor in the speciation of self-pollinating plant species. It is because such plants do not depend on other plants for its further reproduction to be carried out.
Q12.   Will geographical isolation be a major factor in the speciation of an organism that reproduces asexially? Why or why not?
Ans. No, because the asexually reproducing organisms does not depend on other organisms for their reproduction.
Q13.   Give an e ample of characteristics being used to determine how close two species are in evolutionary terms.
Ans. Two organisms with similar characteristics have genes with similar DNA codes. Whereas the organisms with different characteristics will have different genes, different DNA structures.
Q14.   Can the wing of a butterfly and the wing of a bat he considered homologous organ? Why or why not?
Ans. The wing of butterfly and the wing of a bat cannot be considered homologous organs because both have different structures but same function. They have different basic structural design and developmental origin. They are analogous organs.
Q15.   What are fossils? What do they tell u about the process of evolution?
Ans. Preserved traces of living or dead organisms on solid hard surface is called fossil. Fossils help us to know the evolution, If a fossil is found closer to the surface of earth, then it is more recent in origin than the fossils we find in deeper layers. Fossils, like Archaeopteryx, help us to find evolutionatzy relation between organisms.
Q16.   Why are human beings who look so different from each other in tens of size, colour and looks said to belong to the same species?
Ans. Because irrespective differences in characters they have capacity of interbreeding. Interbreeding is an important criteria to categorize them as one species.
Q17.   In evolutionary terms, we can say which among bacteria, spiders, fish and chimpanees have a better body design? Why or why not?
Ans. Evolution shows that body design changed from simple to complex. Hence, bacteria has the simplest body design a rid chimpanzee has the most complex and better body design.
QUESTIONS FROM NCERT TEXTBOOK
Q1.   A Mendelian experiment consisted of breeding tall pea plants bean violet flowers with short pea plants bearing white flowers. The progeny all bore violet flowers, but almost half of them were short. This suggests that the genetic make-up of the tall parent can be depicted as
(a) TTWU1           (b) TT
(c) T r W W          (d) TtWw
Ans. (c) TtWW
Q2.   An example of homologous organs is
(a) our arm and a dog’s fore-leg.
(b) our teeth and an elephant’s tusks.
(c) potato and runners of grass.
(d) all of the above,
Ans. (d) all of the above.
Q3.   In evolutionary terms, we have more in common with
(a) a Chinese school-boy.          (b) a chimpanzee.
(c) a spider,                                      (d) a bacterium.
Ans. (a) a Chinese school-boy
Q4.   A study found that children with light-coloured eyes are likely to have parents with light-coloured eyes. On this basis, can we say anything about whether the light eye colour trait is dominant or recessive? Why or why not?
Ans. No, we cannot say that the traits is recessive or dominant mess we ltnow the nature of the two variants of a trait.
Q5.   How are the areas of study-evolution and lassi ation-interlinked?
Ans. For classification of organisms we generally group the organisms of same characteristics together and those with different characteristics are grouped or classified separately. A. set of characteristics tells about the level of evolution of an organism.
Q6.   Explain the terms analogous and homologous organs with eampies.
Ans. Analogous organs-Organs with different structure and same function e.g., wings of bird, insects. Homologous organs-Organs which have same structure but different functions axe called homologous organ e.g., forearm of lizard, bird and human.
Q7.   Outline a project which ems to find the dominant coat colour in dogs.
Ans. Dominant ? WW (white colour) 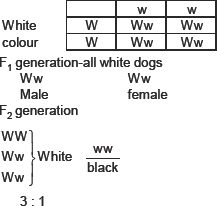 Q8.   Explain the importance of fossils in deciding evolutionary relcitionships.
Ans. Fossils help us to know the following:
(a) Fossils help to trace the racial history of organisms.
(b) They help to measure the geological time,
(c) Older fossils lie at the depth and young fossils are at the upper surface of the earth. Complex organisms are present at top and simple organisms are present at the bottom.
(d) Fossil like—Archaeopteryx-show the link between two different types of species.
Q9.   What evidence do we have for the origin of life from inanimation?
Ans. Miller and Urey in 1953 assembled an atmosphere similar to that thought to exist at early period (Gases like ammonia, methane, hydrogen sulphide) over earth. This was maintained at a temperature just below 100°C and sparks were passed through the mixture of gases to simulate lighting. At the end of a week 15% of the carbon (from methane) had been converted to simple compounds of carbon including amino acids which inalke up protein molecules. Presence of protein cell membrane correlates with above experiment. This shows that life originated from inanimate matter.
Q10.   Explain how sexual reproduction gives rise to more viable variations than asexual reproduction. How does this affect the evolution of those orgciriisms that reproduce se ually?
Ans. Variations are seen more in sexual reproduction than asexual reproduction because variations occur due to change in DNA coding and due to sexual reproduction in which two genes from two different sexes Le., male and female genes crossing over takes place and hence cause the variation.
Q11.   How is the equal genetic contribution of male and female parents ensured in the progeny?
Ans. By studying the crossing over of genes of male sex and female sex is as follows: 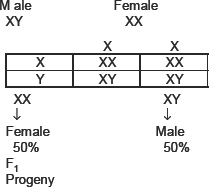 Q12.   Only variations that confer an advantage to an indivIdual organism population. Do you agree with this statement? Why or why not?
Ans. No, depending on the nature of variations different individuals have different kinds of advantages. However, when a drastic change occurs in environment only those organism in the population will survive which have an advantageous variation in that population to survive in changed environment.
error: Content is protected !!