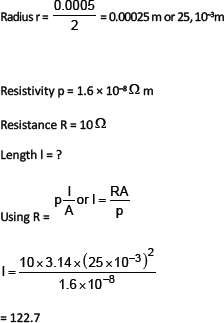 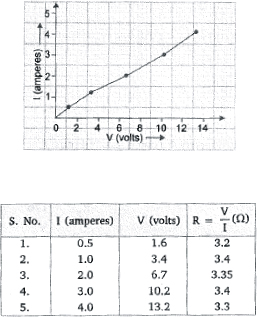 Q12.  Several electric bulbs designed to be used on a 220 V electric supply line, are rata 10 W. How many lamps can be connected in parallel to each other across (he two win. of a 220 V line if the maximum allowable current is 5 A?
Ans. P = 10 W

If number of bulbs connected to current of 5 A is n. Then,

(ii)  When connected in series

(iii)  When connected in parallel 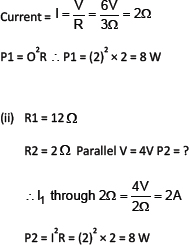 Q16.  Which uses more energy, a 250 W TV set in 1 hr, or a 1200 W toaster in 10 minutes?
Ans. 250 W TV set in an hour
Q17.  An electric heater of resistance 8 O draws 15 A from the service mains for 2 hours. Calculate the rate of which heat is developed in. the heater
Ans. 1800 Wall.
Q18.  Explain the following:
(a)  Why the tungsten a used almost exclusively for the filament of electric lamps?
Ans. •  It has a special property that it glows on heating.
•  It has ,i high melting point.
•  It does not tenet with the gases present in air and does not get oxidized.
•  It has a low resistance.
(b)  Why are the conductors of electric heating devices, such as bread-toasters and electric irons, made up of alloys rather than a pure menu?
Ans. •  They offer higher resistance than pure metals, thus heating better.
•  They have a high melting point.
•  They do not oxidize.
(c)  Why is the series arrangement not used for domestic circuits?
Ans. •  If any appliance is at fault, then the current is not able to flow through.
•  Different appliances have different current requirements, but in series the current is the same. This can cause a power surge, thus damaging the appliances.
•  Very long wires m domestic series circuits offer unusually high resistance, which is unwanted.
(d)  How does the resistance of a wire vary with its area of cross section?
Ans. The relation between the resistance of a wire and its area of cross-section can be defined as:
•  R is inversely proportional to the area of cross-section

(e)  Why copper and aluminium wires are usually employed for electricity transmission?
Ans. •  Copper and aluminium are much more easily and cheaply available than other metals.
•  They offer low resistance and do not get heated.

•  They can be easily made into wires due to high malleability.